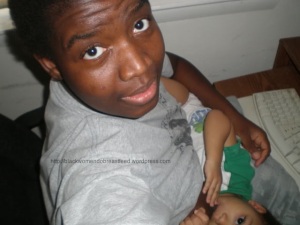 Christina is the mother of two sons ages 5 years 5 months and 2 years 10 months. She breastfed both of them for approximately two years each. You can find her occasionally blogging about her life at lafemmedesfemme.

What motivated you to breastfeed?

It really started because I started reading birth stories on the internet.  I had an intense interest in birth, which morphed into an interest in homebirth, which morphed into an interest in midwifery.  And in all of my reading, breastfeeding seemed to be the natural continuation of what women did when they became mothers–  you conceive, you gestate, you birth, you breastfeed.  Having that sequence drummed into my subconscious over and over and over eventually made formula-feeding seem like the weird, extraordinary thing to do.

What is the history of breastfeeding like in your family?

If my mother breastfed me, it wasn’t for very long.  It’s not something she’s ever talked to me about.  When my brother was born when I was almost 9 years old, I vaguely remember my mother nursing him, but I don’t think it lasted more than a few months, since she went back to work not long after he was born.  From what my mom’s mom has implied, I think she nursed her children for about a year each.

What was your attitude toward breastfeeding before having done it yourself?

Before reading so much about it online, I didn’t have an opinion about it one way or the other.  It wasn’t on my radar at all.

The early days with my first son were hard.  Complicating the whole issue of each of us learning how to do it, was the fact that I have eczema (and have since I was a baby), and had a flare-up on my nipples right after he was born.  Nursing him for the first several weeks was excruciatingly painful until I learned how to take care of my nipples when a flare-up happened.  And when my milk came in, I came down with what I later learned was mastitis.  Apparently, ignorance was bliss for me, because I instinctively did what you’re supposed to do when that happens– I took us both to bed and did nothing at all but nurse for the next day or so until I no longer felt like death whenever I stood up.  Fortunately, those were the only problems we had, really.  He learned how to nurse with no problems, gained weight really well, and slept well enough that I was able to get decent sleep.  I really lucked out!  The early days with my second son were a breeze, comparatively.  My milk came in with no drama, my eczema didn’t flare up, and I had a better idea of how to handle a newborn.  All in all, it was a much easier time.

What has been your biggest breastfeeding-related challenge?

Managing my eczema, especially when all of my skin flares up and it hurts to be touched.  Fortunately, those times are few and far between!

What has been easiest about breastfeeding?

The convenience of it.  Once we got the hang of it, we could nurse anywhere and not be at the mercy of outside circumstances to get my kid fed.

How has breastfeeding changed from one child to the next?

With my first son, I felt like I was all thumbs for a while.  Nursing felt like a struggle and it was a while before the motions and routine of it became easy and relaxed.  With my second son, the learning curve was much shorter and shallower.  It felt like we fit together almost immediately.

How long did/will you breastfeed? How long exclusively?

My first son nursed exclusively until he was about a year old, because he didn’t show any interest in solid foods until then, and I didn’t push the issue.  He continued to nurse until he was 26 months old, when I was about halfway through my pregnancy with his brother, and my breasts basically cried uncle.  My second son was much more interested in solid foods and I started offering him some things when he was about 6 months old.  He continued to nurse until his second birthday, when again, my breasts cried uncle.  Neither have had formula.

Who have been your breastfeeding role models?

Two friends of mine had babies in the three years before I had my older son, and they nursed their children, in part, because I encouraged them to go to the La Leche League meetings I had been going to years before.  Even though I initiated their contact with LLL, watching my friends with their children really provided me with fantastic role models.

How did you learn to breastfeed?

Back when I was still thinking about becoming a midwife, some advice I got from a midwife’s apprentice was to go to La Leche League meetings for a year, to see what the organization was about and how they helped women.  It was from that time with the group, along with watching my friends with their babies, along with reading “The Womanly Art of Breastfeeding” and “So That’s What They’re For!” that I learned the basic mechanics of breastfeeding.  And then once I had babies of my own, I learned how to breastfeed MY kids.

The best advice I got was well before I became a mother, and that was to get in contact with La Leche League BEFORE the baby arrives.  The worst advice I got was that I should force my older son to eat solids before he’s willing to.

Have you experienced any negative reactions from others regarding breastfeeding?

Not really, and I feel really fortunate for that.  I live in a conservative area, and breastfeeding rates are quite low, but in my little bubble of friends and acquaintances, breastfeeding is the norm.  The closest thing to a negative reaction I’ve gotten was when I was visiting with my sister-in-law.  She was having a first Communion party for her daughter, and a lot of her church friends were there.  My younger son, who was almost a year old at the time, needed to nurse, so I sat down on the couch to nurse him, without a break in the conversation I was having.  I sat down next to a church friend of my sister-in-law’s and when the friend realized what I was doing, she reached over and grabbed a throw that was hanging on the back of the couch, and handed it to me, clearly expecting me to cover up.  I accepted the throw, thanked her, and put it down beside me on the couch.  When she saw that I wasn’t covering up, she excused herself from the conversation, and went somewhere else.  She didn’t say anything further, and neither did I, and the next time we saw each other, we were as friendly as we had been.  It was pretty much a non-incident.  I mentioned it in passing to my sister-in-law, in case the friend had said something about it.  She hadn’t, but my sister-in-law, who had nursed her all of her children, reassured me that I could nurse wherever I wanted to in her house, covered up or not, and that was the end of it.

Who has been your biggest supporter about breastfeeding?

In the literal sense, my husband, because he’s the wage-earner in our household, which allows me to stay home and nurse for as long as we need to.  My circle of friends is also very encouraging and supportive because they’ve all been there and done that.

I don’t think we really had a routine.  When the baby wanted to nurse, I nursed him, and the rest of our life revolved around that.  But our life wasn’t restricted at all.  I didn’t wait around for the baby.  Nursing was like a punctuation to our day.  Wake up in the morning, nurse the baby.  Eat breakfast, nurse the baby.  Get online while nursing the baby.  Nurse the baby, then take a shower.  Nurse, then bathe and dress the baby.  Do housework or nap while the baby naps.  Nurse him when he wakes up.  Nurse him before leaving the house.  Nurse him when we arrive at our destination.  Nurse before leaving for home.  Nurse when we get home.  Nurse before getting dinner ready.  Nurse while eating dinner.  Nurse while online.  Nurse him down for the the night.  Enjoy some baby-free time.  Nurse before going to sleep myself.  Wake a few times or no times to nurse during the night.  Wake up in the morning, nurse the baby…  It became such second nature that it didn’t feel like a separate activity anymore.

How do/did you handle separations from your breastfeeding child?

I’ve been at home with my boys for most of the time I’ve been a mother, though there was a period of a few months when I worked full-time while I was pregnant with my younger son, and another period of a few months when I worked part-time after my younger son was born.  When I was working full-time, I did pump at work for a little while at the beginning, because my older son was still not eating much in the way of solids at that point and I wanted to make sure he wasn’t deprived while I was gone.  Eventually my pregnancy progressed to the point where I wasn’t producing much milk any more and he started eating a lot more solid food, so I stopped pumping.  When I was working part-time, I didn’t worry about pumping because my younger son didn’t have a problem with eating food while I was gone, and our separation was so short anyway.  I just nursed him when I dropped him off at the babysitter, and nursed him again as soon as I arrived to pick him up.  During the times I wasn’t working, I just timed my separations to be in between nursing sessions.

Is there anything that you wish you would have done differently?

I do wish I could have breastfed both of my sons for a little longer.  Neither were ready to wean when I weaned them, and it was an upsetting process for all of us.  I loved nursing, and felt kind of betrayed by my body to give out as suddenly as it did.  But I don’t know what else I could have done.

What would you say to a woman who is unsure about whether or not to breastfeed?

I would ask her to please consider that breastfeeding is a normal part of human physiology.  Choosing between breastfeeding and formula-feeding isn’t like choosing between chocolate and vanilla ice cream.  It’s choosing between being confident that biology is on your side and your body is producing exactly what your baby needs, and being hopeful that the latest scientific interpretation of that biological perfection will have enough of what your baby needs to not be detrimental to your baby down the road.  Sure, plenty of babies do fine on formula, but it took a lot of misses to get those hits.  Why gamble?