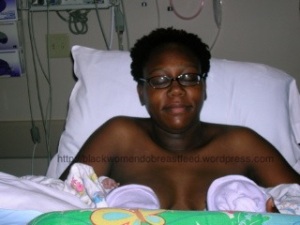 Erykah is the soon-to-be mother of six children: a now 11 year-old who was breastfed for 16 weeks, a (step)daughter, twins who were breastfed for 19 months, and an 18 month-old son who just weaned due to Erykah’s current pregnancy.

You can read Erykah’s family adventures at her blog, Catastrophe Out On the Lawn.

My breastfeeding journey actually started way back in 1999.  I was 20 years old, just had my first son.  I had never witnessed anyone breastfeed besides my sister-in-law the year prior, a Swedish woman who nursed whenever baby was hungry and wherever she was. The fodder she caused by nursing a baby in my family was outstanding.  The family spoke about her extensively behind her back about how she lacked tact, morals and self respect by “whipping it out” all the time,  I decided that I would try nursing but I was met with resistance by my family and even from the hospital staff.  As I awoke from general anesthesia, I learned that my son was given several bottles of formula and pacifiers.  Still I tried nursing.  I nursed but supplemented very heavily for several weeks but it was the point of nursing once a day and feeding several bottles so I quit.  I had no support at home, my own mother wondered why I’d even bother to breastfeed.

Fast forward seven years.  I was pregnant with twins and with a newfound determination, I knew I was going to breastfeed.  I had several friends who were very much pro-breastfeeding and natural minded.  Having that support and information on my side, I set out to exclusively breastfeed twins and I succeeded.  I nursed them exclusively for six months and continued to nurse them until they were 19 months, half way through my next pregnancy.

The next baby was a no-brainer.  He was my fourth biological child and he would be breastfed for at least a year but hoping more for two.  When Nathaniel was born, our life was great.  He was a nursing champion.  My milk came in appropriately and timely, he gained 10 oz the first week and I wasn’t expecting any problems nursing him.  Then he developed eczema several weeks later.  I researched it to no end and discovered he had a milk protein allergy, he fit all the symptoms.  I brought him in to the pediatrician and we discovered that not only did he have a milk protein allergy but he had a severe heart murmur that was restricting his growth.  We were referred to a cardiologist, I was told to supplement and we were sent on our way.

I knew my son needed breastmilk more than anything especially with a fragile heart and I knew he needed to put on 2 lbs in order to have the least invasive heart surgery so I nursed.  And nursed and nursed and nursed.  I also hired a lactation consultant and attended La Leche League meetings.  I scoured the internet to find suggestions to boost supply and fat content and literally nursed my son every 45 minutes around the clock.  Everyone, including our pediatrician told me to give up and feed him formula but I was determined to give him the best start.

We met and exceeded the goal of 10 lbs and strictly on breastmilk.  He had his surgery and healed wonderfully after.  Despite our best attempts, he contracted RSV and became very ill.  When we went in for a chest x-ray, we learned that he had a congenital hiatal hernia which placed his stomach 90% into his chest cavity pushing his left lung up and over.  It was stated to me by three different surgeons that if he had been fed formula, he would have likely died as a result of the placement and severity of his hernia. He was still struggling to grow but he was thriving on breastmilk.  We needed to wait for the RSV to clear up before they were able to operate.

We went home, I snuggled him and nursed him to his heart’s content.  He not only maintained his weight, he grew even with the hernia!  By the time the four weeks passed, his RSV was cleared he had his surgery and he was finally healthy.  After his surgery, he was nursed for two more months exclusively and thrived!  We finally started him on solids at 8 months but he preferred to nurse and nursed pretty consistently for the next 10 months. Being exclusively breastfed is what saved my son’s life.